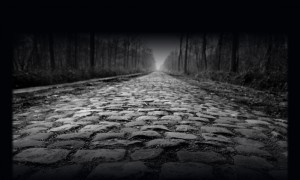 Sunday was a day for cyclists to dig deep, to bounce through the endless, jarring cobbles. Stay light in the saddle, I was warned. Take some pressure out of the tyres. Go for a higher gear. Get ready to feel every tooth rattling in your skull.

Sunday was of course the greatest of the one-day classics, l’enfer du nord (the hell of the north), the Paris-Roubaix race covering 27 ‘sectors’ on bone-shaking pavé, or cobblestones. So in our own little homage to one of the great cycle races, ride organiser Pip of Le Sportif managed to find the only cobbles in Bristol to finish our Sunday morning training. A lap of Queen’s Square was quite enough to leave my teeth chattering and my admiration soaring for those that ride for hours on cobbles that probably make ours look like gravel.

Then we adjourned to Bristol’s Mud Dock to watch the race unfold on the big screen. The duel between Fabian Cancellara and Sep Vanmarcke lasted until the final yards of the 254 km race. Cancellara covered that distance to win in five hours 45 minutes and 33 seconds – about the same time it had taken me to do just half the distance in training that day – and my ride comprised just 200 yards of cobbles.

This weekend saw the opening of another first for Bath – seven years after the idea was first proposed, the ribbon was cut on the longest cycling tunnel in the UK. 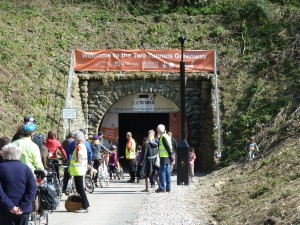 The Two Tunnels project brought two former railway tunnels back to life nearly 50 years after they were closed. There’s now a flat route from central Bath south out to the beautiful Midford Valley – made perfect for cyclists, walkers and for the bats that live in the tunnel too. The lighting has been hung low and kept dim to keep the top of the tunnel arch dark to accommodate the rare bats that have lived there for years.

There were none of those to be seen on Saturday however, as I was one of more than 2,000 people to ride through the tunnels on the day of the opening ceremony. The experience of riding from the glorious spring sunshine (that appeared bang on cue for the festival of cycling that marked the opening) into the low-level lighting of the tunnels was unique. Any other cycling tunnel I have been through, you can always see light at the end. Here the second of the two tunnels runs underground for 1.8kms so it takes a while to let your eyes become accustomed to the low-level lighting. 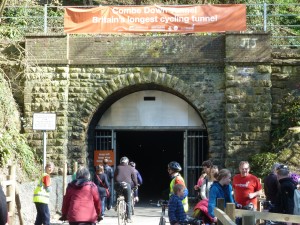 Even in the crowds using the tunnel on its first day, there were still moments of peace that you rarely get cycling anywhere in the UK, made even more memorable as you cycle past the interactive sound installations placed at intervals through the tunnels. The tunnels themselves have needed very little work to open up again. Structurally they’re much the same now as they were when steam trains ran through them – a real testament to the 19th century engineers who built them. 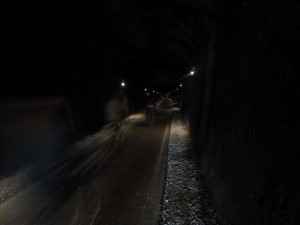 Then you emerge, blinking, into the spring sunshine of the beautiful Midford Valley – straight onto the restored Tucking Mill viaduct and then into Midford village, where you can look back towards Bath up the steep Midford Hill and realise you don’t have to cycle up that to get home!

The traffic-free cycle route continues to Wellow and even on via Radstock to Frome via the Collier’s Way, albeit with quite a few breaks in what was once the Somerset & Dorset railway line where further work is needed to make the cycle path more or less unbroken. And there’s now a pretty flat and almost entirely traffic-free circular route from Bath out to Dundas Aquaduct and then back on the canal towpath 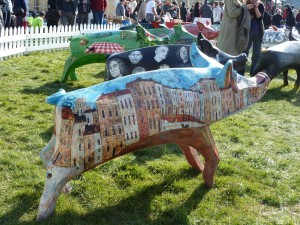 The Two Tunnels project is a testament to what a few committed individuals can achieve. It’s taken the involvement of the fantastic Sustrans, £4m of funding (£200,000 of that raised through the brilliant King Bladud’s Pigs project auctioning artistic pigs) and a great deal of hard work from volunteers. But what has been achieved is another great boost for cycling in Bath and a UK-wide attraction. And looking at the beaming smile from my nine-year-old son when he had ridden through the tunnels with me on Saturday, it’s already proving successful in inspiring the next generation onto two wheels too.