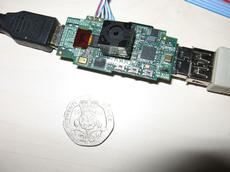 The Raspberry Pi is going to change the world, says the influential Silicon Valley blog Business Insider. Even if you think that’s Valley hype, and I do, there’s a very strong chance that it could revolutionise the way we teach children computing.

I’m a big fan of the Raspberry Pi  – a very basic £15 computer designed to let your children play around writing code somewhere other than the family PC. I blogged about it when the first (alpha) release came out in September, so I am thrilled that the day is nearly here when the producers start shipping the finished article.
Business Insider has celebrated the arrival to market of the Pi in their typically breathless prose. But I agree that there is real reason for excitement, real reason to believe that this is a game-changer:

Eben Upton, the Cambridge engineer who’s masterminded the Raspberry Pi, says that the first batch of 10,000 units will be available for sale within the next few weeks, following a successful test over Christmas. And that’s how they’ll continue to produce them, in batches of 10,000 units once or twice a month. I am cerainly going to be looking to buy one as soon as I can to teach my own son some of the rudiments of programming. And then I can see for myself whether this little device really could be a world-changer.