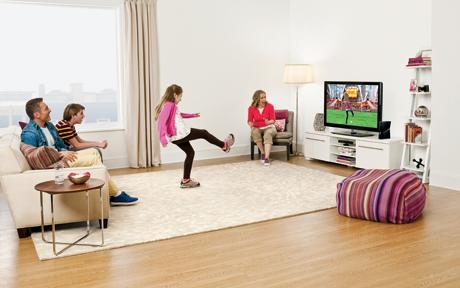 With a flick of the wrist Microsoft has this week leapfrogged rivals by getting rid of computer game controllers altogether.

Kinect goes on sale this Wednesday as a plug-in to Microsoft’s hugely popular Xbox  console. Players navigate menus with a flick of the wrist, then run, jump, dance and of course shout to direct their avatars’ actions on screen. Kinect even “remembers” your body shape so it can recognize you without any log-in.

The first batch of games are pretty tame stuff – water rafts, ping-pong, yoga. But don’t be fooled into thinking Microsoft are just playing around. The launch comes six months after Apple overtook the Seattle giant as the world’s most valuable tech company.

Of course Microsoft has a long trail of failed hardware launches: remember the Zune? this year’s Kin phone? The Portable Media Center? But this time they may have really hit on a winner. “I’m excited to be way out in front” says CEO Steve Ballmer, “and want to push the pedal on that”.

Surely aren’t pedals a bit of a 2009 interface?