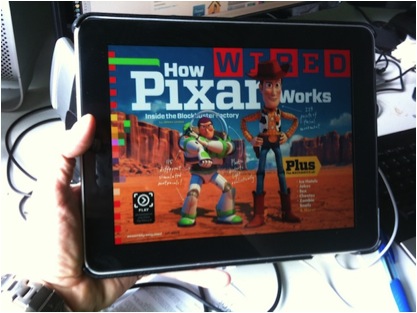 The first television broadcasts were nothing more than a camera placed in front of a radio announcer. The first films ever made were shot through a proscenium arch to replicate the theatre experience. New art forms tend to lag behind the introduction of new technology.

So it should come as no surprise that, after 50 days of owning one, the iPad has not re-defined my media day. Mostly, I consume, rather than create. And on the iPad, my consumption has yet to change gear: newspapers, magazines and the odd book; web pages on the sofa; games with the children.

In this I am not alone. A survey out this week from copywriting firm Cooper Murphy Webb found iPad owners in the UK considered it best for reading newspapers and magazines. For books, it was more marked – 41% of iPad owners liked to read on the device, against 36% who preferred hard copies (the rest were other screens before you ask).

Of those surveyed I would imagine most, like me, were eager to try out their new toy on anything they could get for it. And mobility isn’t really the killer function. More than 60% rarely or never take it out of the house – just 5% always do so.

Just as film moved on from the proscenium arch shot, so the iPad will find its moment. I can already see the first sparkle of new ideas: my subscription to Wired comes alive with video, hyperlinks and animated graphics in a way that the magazine never could; my children are eagerly learning chess because the iPad is different; my DJ-friend using a turntable app to professionally mix his iTunes collection; and I am playing the (virtual) piano again.

Cooper’s survey found almost a quarter of iPad owners saying it had become their primary entertainment device. It’s inevitable that most of that entertainment was created for another screen or medium. In time, this device will change our media experience once again.